Curly birches (Betula pendula var. Carelica) are almost always silver birch (Betula pendula) individuals. There are just a few downy birches (Betula pubescens) that bear curly birch characteristics. Botanically, curly birches do not constitute a species or a subspecies; instead, they are deemed to form a genetic variety. A variety differs very little from the actual species and its area of distribution is more limited than that of a subspecies.

Curly-grained wood occurs clearly most of all in silver birch. Considerably less curly-grained wood has been found to occur in pubescent birch, grey alder and black alder, rowan, goat willow, and maple. Curly-grained wood is a hereditary variety passed on through seeds and it has come into being as the result of mutation. 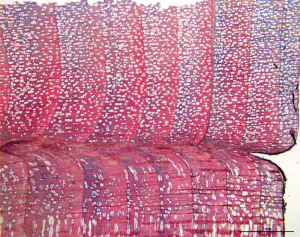 Curly-grained wood is characterised by abnormally wide medullary rays (a.k.a. pith rays, wood rays) and exceptionally orientated tissues. This phenomenon is also accompanied by pieces of bark becoming embedded in the wood of the stem, and these stand out as brown spots and stripes. The formation of curly-grained wood has the effect of slowing down the growth of the tree.

Burrs are swollen formations, often spherical in shape, in tree stems, branches or roots. At times, a burr resembles curly-grained wood, and these two phenomena are very alike.

The cause behind burr formation is difficult to pinpoint. Possible causes include injuries caused by insects and mechanical damage, and localised mutation (changes in genetic factors). A cell in the cambium layer of the tree divides faster than the rest of the cambium cells. The abnormal growth of woody tissue may continue throughout the tree’s lifespan, and as a consequence the burr may become quite large, perhaps over 1 metre in diameter. The bole of Pinus sylvestris f. gibberosa is full of burrs. These burr-bearing pines occur throughout Finland, but they are not common at any particular location. Individual, sound burrs do not usually cause changes in wood quality, and so the wood can be used in the normal manner, e.g. to produce sawn goods.

There are other reasons for burr formation, too. Lime trees and goat willows often have burr-like formations at their base initially caused by constantly growing and dividing dormant buds. A common fungus causing rot in birch is the chaga or clinker fungus (Inonotus obliquus), which forms dark, burr-like formations on the stems of birches. However, these formations are the conks, i.e. the fruiting bodies, of this fungus, which is a parasite attacking birches. The woody tissue of actual burrs is hard and very durable. It is highly suitable as the raw material for items subjected to intense wear, e.g. handles and small vessels. Goat willow burrs are particularly valued as the raw material when carving burr cups. Very large burrs have been used even for making furniture.

Some softwoods and hardwoods, most commonly birch, occasionally exhibit wave-like wood structure, which differs from burr formation. The tissue structure of wave-like formations in the wood of trees is normal apart from the wave-like radial and/or tangential variation of the wood grain. This wave pattern in wood, and mostly when it occurs in birch wood, is in great demand as the raw material for furniture.

Curly birch is a highly multifaceted birch variant, and at times it can be difficult to distinguish it from the common silver birch. The external characteristics of curly-grain formation can vary a great deal from tree to tree. A tree with external signs of curly-grainedness may still lack the curly-grain wood pattern. And at the other extreme, a silver birch having the look of a normal silver birch may, on closer examination, after having been felled, prove to be a curly birch: despite the long and smooth stem, the cross-section surface exhibits a fine curly-grained pattern. The reality shows itself only after the tree has been felled.

The foremost characteristics of curly birch are as follows:

Habit: the stem is shorter than that of normal silver birch trees, its taper is more pronounced, and it usually exhibits a slight sweep. Bud formation in abnormally abundant, and this leads to the branching of the stem and often results in a bushy habit. The crown of such trees become rounded and often level. The branches are generally thick and crooked. In addition, the tree tends to lean in the direction where there is more room for growth and more light. The habit of curly birch has a lot in common with that of apple trees.

The annual rings are wavelike and irregular, with brown curly-grained wood tissue cells often exhibit a V pattern in the cross-sectional view. If this pattern continues evenly across the entire surface, the result is a starlike pattern (a.k.a. curly-grain blossom). The longitudinal section of the stem exhibits lenslike patterns. The wood of curly birch is dense and very heavy, when freshly felled it can rise to 930 kg/m³, and at 12% moisture approx. 700-730 kg/m³. Curly birch exhibits some exceptional leaf forms, but these cannot be used as certain identifiers. The irregular bud formation connected to curly-grainedness results in abundant branching and bushy habit among curly birches.

The point in time when curly-grained wood starts to form varies. Some seedlings exhibit signs of curly-grainedness already at the nursery, but more often this characteristic is manifested in later years. In the plants and in the small trees and at the bases of branches the abnormal base bellying on the basis of which one can conclude that the plant is a visa is seen often already as a young. Usually curly-grainedness begins by the ten year age.

The curly birch is found natural only in Europe and also here only in small separate areas. It is naturally found in Finland in Southern Finland up to the height of Jyväskylä about especially in former swidden areas. In Finland, it occurs naturally in Southern Finland up to the latitude of Jyväskylä, and especially in former swidden areas. As regards the other Nordic countries, curly birch occurs in parts of Southern Sweden and in the most south-easterly parts of Norway. In addition to the above, curly birch is to be found in the Russia (Karelia, Inkerinmaa), in the Baltic Countries, in Belarus, and in some other western parts of Russia. There also are scattered stands of curly birch in Central Europe. However, curly birch is most abundant in Finland and in the Karelia part of Russia.

The distribution of the curly birch is depicted in an old Finnish proverb: “Curly birch grows only so far from a church that one can hear the sound of the church bell.” Being a light-demanding and slow-growing tree, curly birch competed with other, faster-growing, tree species on former rotational swiddening sites. The short rotations applied in those former times created favourable competition conditions for curly birch. The end of the practice of swiddening, development of advanced silviculture, and the great demand for curly birch (when considering its very limited availability) have all reduced the natural occurrence of curly birch. When cultivated, curly birch is at its best in Southern and Central Finland, but if slower growth and greater risk of failure are accepted, curly birch can also be grown on good sites in Northern Finland.

The site and stand density have been observed to influence the onset and degree of curly-grainedness. Geographical location does not play a role in the occurrence of curly-grainedness in birch. The northernmost curly birch plantations have done well at Koli, Pyhäkoski, and Rovaniemi. Groups of curly birch have been noted to occur as far north as Ivalo (Etholén 1978).